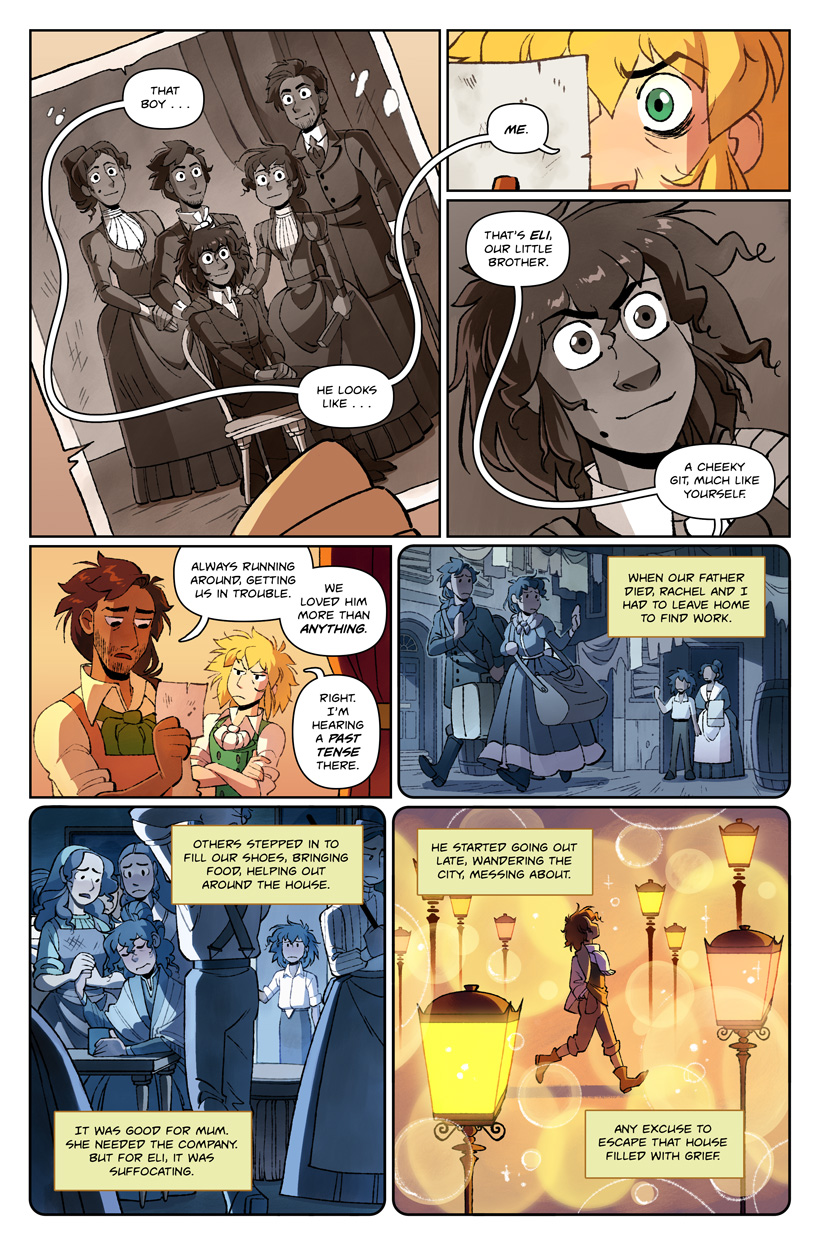 My guest assistant for this page was Lucy Xue!

Flashbacks are hard to write! I find it so easy to just write out a full wikipedia page for a character's backstory that editing becomes a nightmare. This is a fairly short one, so it couldn't get too out of hand, but I am fully in the weeds writing the final script for the next chapter, which I might have to call "Oops! All Flashbacks."

I finished the outline for Chapter 11 by the end of summer, but since then a number of things have happened to change my perspective on writing and on this story in particular. As a result, some rewrites are in order, or at least some embellishments. If Chapter 10 could stand to be hornier, Chapter 11 could stand to be gayer. Or-- not gayer. Queerer. I'm coming to realize how important queerness is to my work, and I want to embrace that in a way I was never brave enough (or stupid enough) to in my 20s. In a perfect world, I would write the whole comic from scratch with overt queerness in mind, but hey, it's 2021! Nothing's perfect and everything's on fire!

EDIT 03/17/21: Speaking of "nothing's perfect," the next four pages went through a rewrite several months after their original post date. While the gist of the pages remain the same--Eli's death and Rachel spiraling in a desperate bid to protect Hyde at all costs--several details had to change because they skirted troublingly close to Romani stereotypes. Now, you may be asking: "Wait, Rachel is Romani?" Which is fine! Rachel is Romani, but I haven't yet found a place to bring up her heritage specifically. And since it's not a major element of the story and I'm not Romani myself, I didn't want to go around saying, "Look at me and the amazing Romani representation I included!" in a "Dumbledore was gay the whole time!" kind of way.

And yet, I know I've mentioned it casually a couple times before, because at least one reader, Hollis Coffin, was recommended the comic specifically for its Romani representation. After I posted Page 18, he left a comment that basically said, "Hey, the last few pages have portrayed some really nasty Romani stereotypes." Now, I do generally try to be aware of racial stereotypes and work to avoid them in my writing. And I had recalled reading a list of Romani stereotypes in the past and taking note of them. But at the end of the day, there's a difference between learning about stereotypes as an outsider and truly understanding their impact as a member of that community--as I would if we were talking about East Asian stereotypes.

As I was writing these scenes, I was hyperfocusing on Rachel's past trauma and her poor coping mechanisms dealing with that trauma. It truly did not occur to me that those coping mechanisms might have unfortunate implications, given her cultural background. But because I didn't think things through, I ended up slamming face first into the sliding glass door of stereotype. (The most egregious example: Lucy originally tricks Rachel into admitting that she would be willing to kidnap Hyde and lock him in Lucy's basement in order to keep him safe, and "kidnapping Romani"=real bad.)

Luckily, Hollis offered to do a sensitivity reading session with me to help problem solve this section. He was an enormous help in creating rewrites that kept true to the overall intention of the scene while also providing  historical context for British Romani culture in general. I'm not sure if he's available for sensitivity readings on the regular (he seems quite busy, I don't want to assume), but if you're in the market for a sensitivity reader, I would highly recommend him!